The kick heard ’round the Big Easy

It appeared to be another loss for the dismal New Orleans Saints. With two seconds left on the clock, they were down 17-16 after the Detroit Lions had kicked an 18-yard field goal to take the lead. The date was Sunday, November 8, 1970.  The place was Tulane Stadium in New Orleans Louisiana.

“Tell Stumpy to get ready to go in and kick a long one” ordered special teams coach Don Heinrich. The Saints were on their own 45 yard line. Looking forward, the goal posts seemed miles away.  Enter Tom Dempsey, a 22-year-old placekicker for the Saints.  He would only have two seconds to do his job.  His objectives were daunting: nail a 63 yard field goal, win the game, and make NFL history.

Saints holder Joe Scarpatl crouched down, took a knee, and awaited the snap.  The second the ball was ejected between the legs of center Jackie Burkett, the Detroit defensive line exploded into action. However, the Saints line did their job even better.  No one came close to approaching Dempsey and Scarpatl.  A humorous photo given to Dempsey days after the kick showed Saints lineman “Wild” Bill Cody taking out Lions legendary linebacker Alex Karras with a foot to the groin.  Sometimes you do what you have to do to make history.

When the nose of the ball slammed into the turf and rotated laces north, it was at the Saints 37 yard line.  Dempsey calmly approached the ball and kicked it straight on versus soccer style (a style all NFL placekickers use today). It sailed straight and cleared the uprights with two feet to spare.  The clock zeroed out, the Saints won, and NFL history was made. 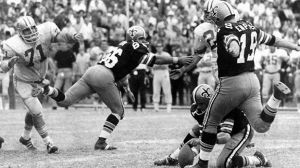 What makes Dempsey’s field goal so extraordinary is that he kicked the football with half a right foot.  Tom Dempsey was born with a club right foot that required a custom-made shoe (equipment approved by the NFL in 1969) with a flattened toe surface for kicking. The shoe became controversial as some claimed it gave Dempsey an unfair advantage over other placekickers, likening the contact surface of the shoe to a golf club striking a golf ball with a sledgehammer like force. The NFL eventually settled the matter in 1977 by enacting the “Tom Dempsey Rule” which states the following: “Any shoe that is worn by a player with an artificial limb on his kicking leg must have a kicking surface that conforms to that of a normal kicking shoe.”

In 1998, Denver Broncos placekicker Jason Elam eventually tied Dempsey’s record. To this day, however, no one has broken it.  Dempsey, now 63, fondly remembers the historic day: “I was more concerned about kicking it straight because I felt I could handle the distance, whatever it was,  I knew I was going to get a perfect snap from Jackie Burkett and a perfect hold from Joe Scarpati. It was all up to me. I had to hit it sweet.”