Flying high and in the black

I have always enjoyed Southwest Airline’s television ads.  The latest campaign entitled Good Cop Bag Cop features a Southwest ground crew driving baggage loading vehicles in pursuit of an airliner taxiing for takeoff.  The tail of the aircraft is digitally camouflaged to conceal the identity of the guilty airline charging passengers for extra luggage.  “Pull over, we know you’ve been charging for bags” shouts one of the crew members as the team tries to force the large jet off the taxiway. The ad concludes with another great line: “you can fly, but you can’t hide”.  Below is the ad posted on YouTube.

The reason Southwest Airlines doesn’t charge for baggage is simple; they don’t have to.   Since its first flight on June 18, 1971, the Dallas based airline has consistently been one of the most profitable airlines in commercial aviation history.   In 2010, Southwest celebrated its 37th consecutive year of profitability.  Southwest is also the largest airline in the world in terms of passengers carried per year and has the worlds third largest fleet of passenger aircraft.  Southwest’s business model has been duplicated by several newer airlines while older and more established carriers continue to nickel and dime their passengers to death.  In my opinion, the following are the major reasons behind Southwest’s financial success. 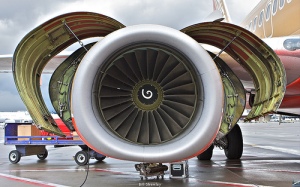 Southwest Airlines only flies one type of aircraft: the Boeing 737.  This means that maintenance crews only need training for maintaining one aircraft.  This reduces training costs and allows maintenance crews to become unified Boeing 737 specialists that can quickly maintain and repair any Southwest jet anywhere in the country.  Procurement of replacement parts and equipment don’t require different aircraft considerations and are simpler and more cost-effective to purchase and manage.   Southwest also replaces aircraft in its fleet every 7 years thus keeping its fleet state of the art and low maintenance.

One of the major reasons many airlines are flying in the red these days is high fuel costs.  Southwest anticipated this early on and uses an aggressive energy trading strategy called “fuel hedging” to protect itself from fluctuating fuel costs by locking in a predetermined price for jet fuel.  Southwest also uses a proprietary water pressure washing system to clean turbine blades on its engines.  This procedure improves fuel efficiency by about 1.9% per flight.

Instead of serving meals on its flights, Southwest only serves light snacks and beverages.  There are also no in-flight movies or special entertainment options offered. This lowers food costs per flight, lightens planes for better fuel efficiency, and allows flights to depart from the gates sooner.