A voice that could not be silenced

This past weekend, my wife and I took a personal retreat down the California coast to a little town called San Simeon.  While driving down Highway 1, we were listening to the inspiring music of vocalist Renee Bondi, a contemporary Christian recording artist from Southern California.  Renee Bondi has a gorgeous and powerful voice.  Beyond her singing voice, however, is an amazing and miraculous story.

In 1988, two months shy of her wedding, Renee fell head first from the foot of her bed in the middle of the night.  The impact from the fall shattered her cervical vertebrae 4 disk and paralyzed her from the neck down.  After undergoing a CAT Scan, Her neurosurgeon delivered the grim diagnosis: “You are a quadriplegic.  You’re paralyzed from the neck down.  You’ll never walk again.  You’ll never sing again.  And you’ll need help with about every function of your life”.

He was right about everything but the singing.

Had Renee crushed the top 3 vertebrae disks she would probably never speak again and would require a ventilator to breathe.  However, because she only broke the vertebrae 4 disk, nerve signals to the diaphragm (a respiratory muscle necessary to manage air flow for singing) were only severely compromised but not severed.  While it would take a tremendous amount of therapy, singing was still possible.

While in the hospital, a vocal coach friend devised an unconventional respiratory therapy technique to strengthen her diaphragm.  This involved placing ankle weights across her chest to build up diaphragm muscle strength.  Within five months, Renee was lifting 55 pounds of weight with each breath. 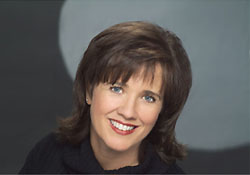 By 1992, Renee was beginning to sing again with the help and encouragement of a friend who would pull her wheelchair over to her piano.  She recorded her first album Inner Voice that same year and recorded five albums after that.  In 1995, Renee gave birth to her Son Daniel becoming one of the only quadriplegic females ever recorded to deliver a child in the United States.  Throughout this entire journey, Renee’s faithful husband Mike has never left her side since the day they were married.

I have seen Renee Bondi several times in concert and have heard her powerful testimony.  Her face is radiant when she sings.  Her smile and energy are infectious.  Her voice is unbelievable.  Her faith in God is beyond inspiring.  If you were to listen to her CDs or see her in concert and close your eyes, you would never know she is paralyzed.

While her physical body became still and dependant from paralysis, her amazing voice was not lost.  A voice that could not be silenced.

More information about Renee Bondi can be found on her website.