Today I was reading about the miraculous recuperation of Matthew Blea, a 17-year-old high school football player for San Jose High Academy.  On Thanksgiving Day 2009 while playing in an annual football game against a rival high school, Blea was hit and collapsed from a severe concussion and was immediately rushed to a local hospital.  His brain injuries were substantial and required three major surgeries.  Doctors later diagnosed his condition Second Impact Syndrome, meaning they believed he suffered a previous concussion.  Blea was one of the lucky ones, he almost did not make it.

Whether in high school, college, or the pros, football concussions are on the rise with an estimated 43,000 to 67,000 concussions occurring annually within high school football alone.  Football has always been one of the most dangerous sports played and involves increasingly more violent high-speed head to head collisions between players.  The concussion of the human brain has been studied in the medical community for decades and has involved congressional hearings and testimony.

In my opinion, the seriousness of a concussion has been grossly underestimated and is frequently written off as just being a part of the game.  Concussions are far more complex than just “getting your bell rung” or “seeing stars” as some coaches might phrase it.  The concussion is a traumatic movement and collision of the brain against the wall of the skull bone.  This impact is followed by brain swelling that creates tremendous pressure inside the skull cavity. The human brain was not created to move freely inside the skull.  Furthermore, it is not supposed to bash into the skull and swell like a balloon.  I cannot imagine the level of physical and neurological damage that might remain years after such an episode or episodes.

So what technology is being developed to address this issue? 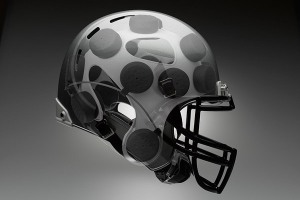 I did a Google search on football helmet technology and found a company called Xenith that has developed a helmet called the X1.  The helmet design uses a network of rubber shock absorber disks inside the helmet called a Shock Bonnet.  When an impact occurs to the helmet, the shock absorber disks release air through small holes thus managing impact energy more effectively than traditional padding materials found in older helmets.

More information on the X1 helmet can be found here.