From rocket science to water guns

Born October 6, 1949 in Mobile, Alabama, Lonnie Johnson grew up dreaming about becoming an engineer.  In high school, Johnson won a national inventing contest after creating Linex, a remote-controlled robot assembled from junkyard materials.  After graduating from Tuskegee University in 1972 with a degree in Mechanical Engineering, he went on to earn a Master Degree in Nuclear Engineering in 1974.

After college, Johnson worked as a Research Engineer at the Oak Ridge National Laboratory, then  later joined the United States Air Force and served as Acting Chief of the Space Nuclear Power Safety Section at the Air Force Weapons Laboratory in Albuquerque, New Mexico.

In 1979, Johnson left the Air Force and worked at NASA’s Jet Propulsion Laboratory (JPL) located in Pasadena, California as a Senior Systems Engineer.  During this time, Johnson was involved with many high-profile NASA spacecraft programs such as the Galileo, Cassini, and Mars Observer projects.  Johnson also earned several prestigious achievement awards for his work in spacecraft system design while at JPL.

Oddly enough, however, one of Johnson’s greatest accomplishments had nothing to do with rocket science or the complexities space travel.  In 1982, while in his bathroom, Johnson shot a stream of water across the room using a homemade nozzle connected to the faucet.  This simple demonstration of pressurized water propulsion was the catalyst for Johnson’s next big idea and invention- a water gun like no other. 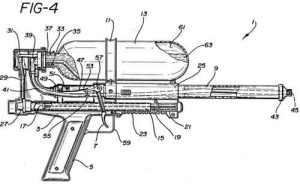 In 1989, Johnson produced a working prototype of what was to become the Super Soaker gun, a large water cannon device that could shoot a heavy pressurized stream of water great distances.  Johnson immediately formed his own engineering firm and licensed his invention to the Larami Corporation who could mass manufacture and market the toy.  The Super Soaker debuted to the public in 1990 and became the top-selling toy in the United States from 1991 through 1992.  Today, sales of the Super Soaker water gun have totaled close to a billion dollars in revenue.

Lonnie Johnson holds over 80 patents with 20 more pending.  He has founded several engineering companies and is the author of numerous technical publications on spacecraft power systems.

1 Response to From rocket science to water guns