The first time I read that San Francisco 49ers Wide Receiver Jerry Rice would become a member of the Pro Football Hall of Fame Class of 2010, my first thought was: “what took so freekin’ long?”.

On Saturday, Jerry Rice joined 6 other football greats as they were inducted into the Pro Football Hall of Fame in Canton Ohio.  Jerry Rice didn’t just break NFL records, he owns them.  Here is a complete list of the major NFL accomplishments and records that Jerry Rice holds today:

Born Jerry Lee Rice on October 13, 1962 in Starkville Mississippi, Rice grew up catching bricks instead of footballs working with his Dad who was a brick mason.  Later, Jerry would be catching everything else.  His 72-year-old Mother Eddie B. Rice fondly remembers Jerry as a 7  year old running around in the back yard:  “Jerry would catch everything.  If you threw it into a thorn-bush, he would catch it”

When Jerry Rice stepped onto the gridiron at Mississippi Valley State University in 1980, he started catching footballs.  During his 4 years at Mississippi Valley State, Rice was a standout receiver and acquired the nickname “World” because there was not a ball in the world he couldn’t catch.  After another record-breaking 1984 season with MVSU, Rice became a major interest to numerous NFL teams including the San Francisco 49ers and Dallas Cowboys.  Rice was eventually drafted April 30, 1985 by the 49ers (16th overall after several trades) after catching the interest of Head Coach Bill Walsh.

The beginning of the 1985 season was a rough one for Rice with lots of dropped passes.  The 49ers has just won their second Super Bowl championship.  The team and fan expectations were high and the honeymoon with the NFL was short for Rice.  However, it only took Rice one solid game to boost his confidence and explode.  In December of 1985, Rice caught 10 passes for 241 yards against the Los Angeles Rams.  The rest of Jerry Rice’s career from that day on was nothing but perfection and greatness.  There was no looking back and many goal lines to cross.

In my opinion, there are very few professional football athletes that performed at the level of Jerry Rice.  Why?  It was his unprecedented work ethic and preparation for every game.  Honoring and practicing work values he learned as a child laboring with his demanding father, Rice never wanted to disappoint anyone and played every game as if his career depended on it.  His conditioning and practice drills went above and beyond the expected training regimens of other NFL players.  Jerry Rice was perfection and precision on the football field on every play.  Every route.  Every catch.  Hard work, focus, and discipline were the ingredients that made Jerry Rice the best receiver in the NFL and why his bust is sitting in Canton Ohio.  His records cover every NFL Wide Receiver category.  No one comes close to ever breaking them.

Saturday was his day to take it all in.  To reflect and bask in glory of the highest honor a professional football player can ever achieve in his career.  One more well deserved cheer from the crowds inside Fawcett Stadium.  As he stood at the podium, he spoke these words: “This is finally it.  There are no more routes to run.  No more touchdowns to score.  No more records to set.  That young boy from Mississippi has finally stopped running.  Let me stand here and catch my breath.  Let me inhale it all in one more time.”

Take it all in Jerry, you deserve it.  You are the greatest ever. 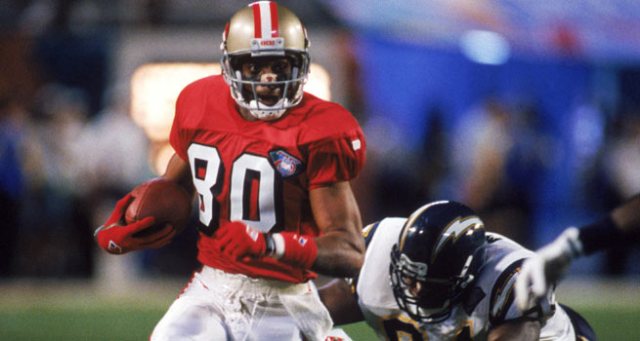